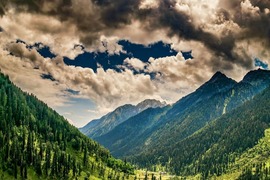 Upon arrival at Srinagar Sheikh Ul AlamInt’l Airport ( This must be one of the Most Scenic Flights in the World, Srinagar is popularly known as the “City of Reshi’s& Sufi’s” and it is also the Summer capital of state Jammu & Kashmir ), you will be met by our representative & drive to Gulmarg via Bye-Pass. Gulmarg, called as “Meadow of Flowers”. Gulmarg is at an altitude of 8700 – ft. Gulmarg also referred as Meadow of Flowers is a famous Ski Resort & the world’s highest 18 hole Golf Course. The place was prominent during the British time. Gulmarg’s legendary beauty, prime location and proximity to Srinagar naturally make it one of the premier hill resorts in the country. Originally called ‘Gaurimarg’ by shepherds, its present name was given in the 16th century by Sultan Yusuf Shah, who was inspired by the sight of its grassy slopes emblazoned with wild flowers. Gulmarg was a favorite haunt of Emperor Jehangir who once collected 21 different varieties of flowers from here. Today Gulmarg is not merely a mountain resort of exceptional beauty- it also has the highest green golf course in the world, at an altitude of 2,650 m, and is the country’s premier ski resort in the winter. On arrival in Gulmarg, check in to the pre-arranged Hotel. Dinner & Overnight stay at Hotel.