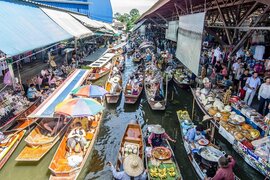 0700 hrs Depart Bangkok For Rachaburi Province
0830 hrs Arrive The Boat Pier, Then Enjoy The Scenery Of Rural Life By The Long Tail Speed Boat. To The Floating Market.
0900 hrs Arrive The Floating Market, Almost Untouched By The Modern World, You Will Enjoy Watching The Farmers Selling Food, Fruits, Flowers And MandKind Of Local Products In Their Boats.
1030 hrs Optional Tour To Visit The Snake Farm Or The Elephant Riding Or The Paddle Boat Getting Around The Farmer Village. Or Free At Leisure At Market Area
1130 hrs Visit The Handicraft Home Industry
12:00 Depart Chang Puak Camp for Rabiang Fah Raft Restaurant
13:45 Arrive at Rabiang Fah Raft Restaurant to have lunch Have a taste of traditional Thai food while enjoying the river view scenery of the Thai countryside.
14:45 Arrive at Kanchanaburi War Cemetary Known locally as the Don-Rak War Cemetery, it is the main prisoner of war.cemetery for victims of Japanese imprisonment while building the Burma Railway. The cemetery was designed by Colin St Clair Oakes and is maintained by the Commonwealth War Graves Commission. There are 6,982 POWs buried there, mostly Australian, British, and Dutch.
15:15 Arrive at the Bridge Over the River Kwai This took the form of the now-infamous Death Railway, constructed by the Japanese using the forced labour of hundreds of thousands of civilians from southeast Asia and prisoners of war from the Allies’ forces. It earned its name for the
amount of death of labourers during the Japanese occupation in World War 2.
15:45 Walk to the JEATH War Museum The acronym JEATH stands for the primary nationalities involved in the construction of the railway: Japanese, English, Australian, American, Thai and Holland. The museum is divided into two sections, one depicting the construction of the Death Railway which is meant to recreate the quarters used by Allied POWs, and the other consisting of reconstructed bamboo huts containing such items as paintings, drawings and photos of and by former prisoners, weapons, tools, and maps.
16:30 Depart the JEATH War Museum for Bangkok
19:30 Arrive at the hotel .